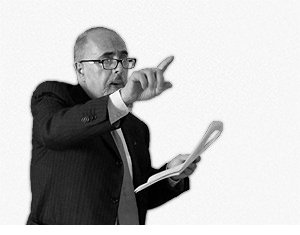 In his brilliant and intense professional life, Salvatore Morgante deals (also at the highest international levels as for his standing and commissioning) with a seemingly malleable context – marketing applied to multimedia communication. In such context, however, for both the project concept and the creative outcomes, the acquisition and demonstration of a highly specialized professionality proves to be essential for the optimal operational management of the inevitable intersection between each objective sector (web, photography, graphics, signs, alphabetic and configurative languages and surroundings).

In the figurative arts, however, Salvatore Morgante, a valuable painter, is still identified as “eclectic”, as long as Eclecticism (I refer to Treccani dictionary) appears as and represents “the tendency to draw inspiration from different sources, taking from each one of them the elements that are considered to be the best (…)” and, consequently, ” the attitude or behaviour of those who, in any field of activity, or in the aspects of cultural or even everyday life, do not strictly follow a single style or method, but blend different styles and  methods”.

Not having yet decided on any “trascegliere” (i.e. to “separate with accuracy and diligence”, as  in Ottorino Pianigiani’s “Etymological Dictionary” (1907) – as reasonable as objectively old-fashioned – he admonishes),  Salvatore Morgante, as an artist, is constantly called upon (mainly, truth to tell, by laymen, though generally in good faith) to “specialize” in mid-stream, to face his eclectic production and to finally make a choice (“trascegliere”) between the different styles and his various techniques, for his own personal charisma, a very strong and sovereign force in the aims and the outcomes of a quite exceptional talent.

He was the one who made me part, and not without suffering embarrassment, of such external suggestions which, although unwanted, were powerful enough to cause identity crises instead of promoting goals. Ever since, I recall telling him off the cuff to send this inconsistent advice back where it came from and to keep up “naturaliter” with the versatility of his varied expression until the moment (not in any calendar) of a decision (not imposed) of a (non-compulsory) “chosen path”. Given that, as I added for his further comfort, Art, authentic art, does not allow and does not accept external straight-jackets and fetters, since there is always a high risk of manipulation (or, and much worse, of fatal and deadly nullification) of the inspiration.

Emile Zola wrote, in this regard, that “a work of art is a corner of Creation seen through a temperament”; and so let all his “corners of Creation” be in the solid and valid eclecticism of Salvatore Morgante. These, punctuated and foolproof like the Eye/Needle with which the Artist (i.e: “the one who acts”) captures, surveys, monitors, detects, expresses and proposes, reveal themselves to be Rosaries of galaxies on paths characterized by precise references to a common “fil rouge” of temperament.

Arcane overlooks of natural and anthropomorphic evocations; blinding and darkening scenarios; compresence of supersigns of the “ex-cavation” through the thousands of mazes and caves of the ego; multiplications and elevations to power in perceiving how symphonic balances are simultaneous; in unison eruptions of explosive stratigraphies in sparkling colours; seductions and spells of hyper-human landsapes in the momentary pauses of composure, before any other eruption of the matter in new and diverse aggregations and dispersions; enigmas and supersigns prophecies; totems of spells and invocations; galactic conflicts between blinding glows and unexpected twilights; oases of solemn serenity, in silent expectation of every judgment of Fate; tsunami of quakes and storms; golden planetary bringing together the languages of lightning and meteors on staves of torment and ecstasy; this and so much more in Salvatore Morgante’s production, of yesterday and today (absolutely self-taught, but commendably Master). And all this in a congeniality of messages and objectives, and only apparently, a subsidiary diversification of techniques, styles, paces and creative outlets, also to prove that, if this means “Eclecticism”, the artist has done well so far, not to “pick out” just for the joy of the profane”.

Writer – Journalist
University Professor of Phenomenology of the Image and Contemporary Arts
Professor of Theory of Perception and Shape Psycology at the Fine Arts Academy Michelangelo in Agrigento.
Member of the Internazional Association of Art Critics.

Back to the Critics